IEMs with tuneable sound seem to be getting more popular nowadays with offerings from brands like JH Audio, AAW and Vision Ears. The downside, however, is that most of these offerings are custom IEMs, adding the inconvenience of impressions and lead time to the equation and it certainly doesn’t help that the abovementioned examples cost well upwards of USD1000.

Enter the Velvet: Earsonic’s new flagship universal IEM, featuring 3 BA drivers in each side with a 3 way crossover, which is user tuneable. Earsonics are asking EUR749 (approx. USD900 at time of writing) for this unit, however, it certainly can be found more cheaply elsewhere online. While this is still by no means cheap, it may a more palatable alternative for those seeking customisable sound but unwilling to take the custom route.

The Velvets appear to have quite lofty ambitions, so let’s see if Earsonics are able to make good on their claims.

Full Disclosure: This unit was lent to me by Musica Acoustics for the purpose of this review. You can find more information and purchase the unit here. 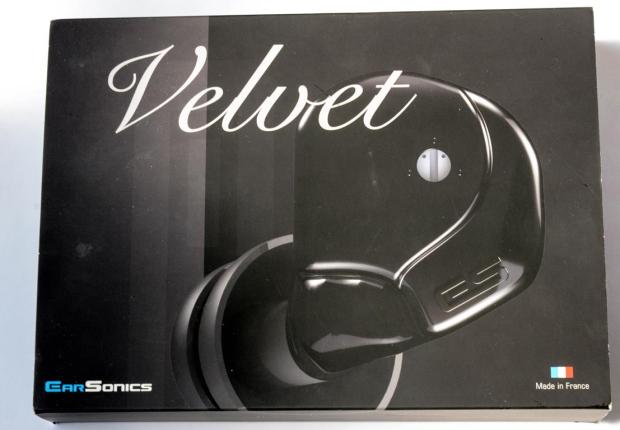 The Velvet comes in an unassuming cardboard box, wrapped in a decorative sleeve. The contents are protected by high quality closed-cell foam. While it doesn’t necessarily feel ‘premium’, I suppose it does allow Earsonics to cut down on packaging costs.

Inside the box, you get:

I was somewhat baffled by Earsonics’ decision to include 3 medium size tips. While, statistically, it might be the size most people will be using, I think including so many of them is superfluous. It might be more productive to instead include some foam tips for those who prefer them.

“Understated” is how I would describe the Velevets in one word. The earphones themselves are housed in a glossy piano black plastic shell, with no real distinctive features aside from the embossed EarSonics logo and white tuning dial. 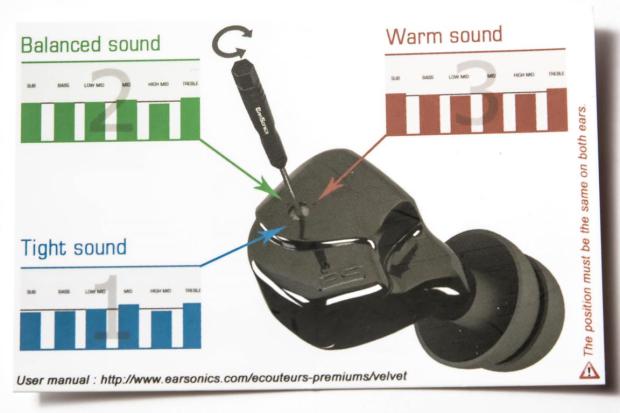 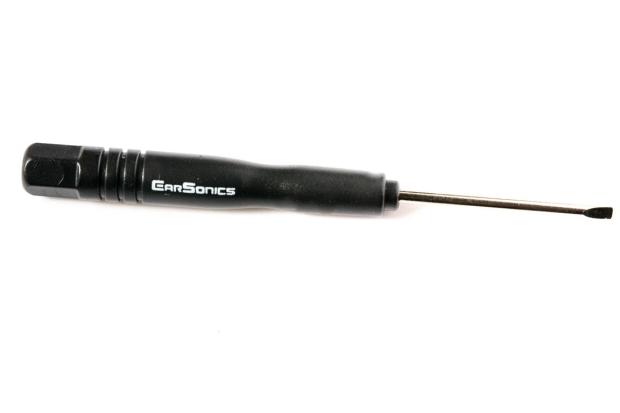 By turning the dial with the provided tuning tool (essentially a fine flat bladed screwdriver), you can adjust the crossover to one of three preset sound profiles: Warm, Balanced or Tight (or anywhere in between). The profiles are represented by the three raised dots on the faceplate which you must align the groove of the dial with. I must admit that this was quite fiddly at first and I found myself consulting the reference card (pictured above) frequently. It also doesn’t help that the dots are difficult to see in low light. However, I did find that the process became easier with practice.

While owners of the first batch of Velvets reported issues with shell durability that caused a widespread recall, EarSonics’ Japanese distributor, Musica Acoustics has assured me that no such problems should be present in units from the second batch and onwards and I am happy to say that I haven’t experienced any issues of the like with this unit.

On the issue of durability, however, I will say that I am quite disappointed with the build quality of the tuning dial, the face of which is composed of a soft plastic, which appears to be very susceptible to wear and tear as you adjust it. It is easy to nick the edges of the groove with the metal tuning tool, especially in low light and other potentially disruptive situations. This will eventually erode the groove, in turn making it more difficult to turn the dial and also to see which setting the dial is pointing to. The dial on the left earphone became practically unusable after barely more than two weeks of use, in my case. Seriously, EarSonics – this thing needs to be made of metal.

I was quite pleased with the included cable. It has a slim profile, feels fairly durable, is easily coiled and tangle resistant. Its glossy black finish also blends well with the aesthetic of the earphones themselves. As with other EarSonics models, the cable is detachable and uses a standard 2-pin connector as found on the likes of JH Audio and Westone IEMs. It should be noted, however, that compared to other brands using the same connector, the polarity is reversed, so you will need to consider this when purchasing an aftermarket cable or making your own.

I do not consider myself to have particularly small ears, but the large size of the Velvets occasionally made it difficult to keep it seated in my ear, in turn causing the seal to break as the earphones moved around. This might be ameliorated by better-fitting tips, although I did not try any others than those included in the original package.

I must confess that the name “Velvet” initially generated expectations of a very thick and warm sound a-la Sennheiser IE80. However, upon trying them, I was quite surprised to learn that this was not the case. They certainly are smooth like velvet, with a very liquid sound absent of any offensive spikes in frequency response, while at the same delivering all the speed, detail and imaging capabilities that I desired. Overall, the sound reminded me of the Ortofon e-Q8, only better: the Velvets display none of the niggling faults that plagued the former while adding some additional bells and whistles, although you would expect this of an IEM that costs more than twice as much.

My impressions below are intended as a baseline or general description of the way this IEM sounds, based mainly on listening to the ‘balanced’ setting. At the end of this section, I will also give specific notes on how each particular mode affects the sound.

The bass on the Velvets ticked all the boxes for me – well extended, plentiful and delivered with hearty impact, while leaving other frequency ranges virtually untouched. It’s also quick and precise enough to keep up with busy genres like house and dubstep. However, due to prioritising an overall smoothness, rather than revealing every last micro-detail, you won’t get the kind of crunchiness and texture from the likes of the UERM or ATH-CK100PRO. Never the less, it’s still an incredibly enjoyable experience; almost at the level of the Unique Melody Miracles, which I regard as producing the best bass I’ve ever heard out of an IEM.

In keeping with the overall sound, the mids are liquid smooth while still being very detailed. I felt that the Velvets were equally competent with male and female vocals, which are positioned quite intimately to the listener and reproduced with all of the texture and breathiness needed to create a convincing and moving experience. Whereas the e-Q8’s had somewhat of a high-mid hump, the Velvets are more linear, resulting in a lesser emphasis particularly on female vocals.

I found that the highs on the Velvets to be highly dependent on the sound tuning setting. In ‘warm’ and ‘balanced’, they lacked the degree of treble extension and sparkle that I was after, causing instruments like cymbals and high hats to step out of the spotlight and in some cases become easy to ignore. However, I do not consider this a deal breaker as this can be fixed by switching the IEMs to the ‘tight’ setting.

The Velvets display what I think is their greatest strength here, with an incredibly spacious presentation backed by excellent separation and layering of vocals and instruments that simply sounds effortless. In my reckoning, they trumped many a similarly priced or even more expensive IEM in this field by a significant margin. Absolutely a class act.

I see the Velvets’ sound tuning feature being most useful in allowing you to enjoy a wider range of genres with the same pair of earphones. I didn’t find that changing the setting altered the fundamental sound signature and presentation, but provided boosts or reductions in certain frequency ranges that can emphasise certain instruments you want to hear more of or de-emphasising potentially annoying features of a song. Without further ado, let’s take a look at the characteristics of each mode:

Warm mode is more or less what the name suggests. The lower ranges gain additional quantity and impact, to practically head-shaking levels, although I am unsure it will satisfy some bassheads. The sound is warmer and thicker overall and treble becomes somewhat rolled off, occasionally making it easy to miss high hats and other instruments in this region. With the increased quantity of bass, I felt as if it also became slightly less controlled and also noticed some bass bleed into the mids in certain songs.

I spent most of my time in balanced mode, which I found offered the best mix of snappiness and impact in the bass and the most natural overall sound. With no significant emphasis on any particular frequency range, this mode allowed music to sound the most well-proportioned and in perspective. Although treble is slightly boosted compared to the ‘warm’ mode, balanced mode lacked my desired degree of sparkle in some songs.

Tight mode brings boosted treble and reduced emphasis on the lower-end, particularly sub-bass. Bass feels more tightly controlled and responsive in this mode and I felt that I was able to perceive more details in this mode. It added all the sparkle I was looking for and then some. The boost in higher frequencies adds a clear edge to female vocals, and appears also to introduce some minor sibilance. Tight mode also produced the reverse of the problem I experienced with warm mode: cymbals and high hats were brought to the forefront, while in exchange, I found it more difficult to hear the bass drum in some songs.

Perhaps it feels like I’m bringing up more negatives than positives in this section, however, I found that the key to using the tuning feature successfully is experimenting to see which setting works with particular genres and artists, thereby effectively expanding the range of music you can enjoy with this single pair of IEMs.

The EarSonics Velvets really surprised me with just how capable and flexible they proved to be. Their smooth, accurate sound and exceptional staging made listening a pleasure, and they remained unfatiguing even for lengthy listening sessions. The tuning feature was really the icing on the cake, allowing them to convincingly and enjoyably render a wide range of genres at the turn of a dial. This, however, also proved to be the Velvets’ greatest weakness due to the tuning dial’s poor build quality.

Still, these IEMs offer exceptional sound quality on par with many flagship CIEMs I have heard, plus the added benefit of customisable sound, all for less than USD1000, which is a praiseworthy achievement for EarSonics in my book. Definitely worth a listen, should you have the opportunity.